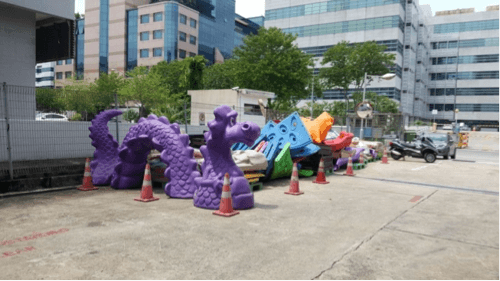 Purpy, the Dragon, was born in USA and landed in Singapore about 11 years. Things did not happen according to plan & Purpy had been in captivity in the Engineering BU’s warehouse at 18 Jalan Kilang Timor since then.

Operation to relocate dragon began and Purpy sailed on 24-Oct-2017.

Initially the villagers struggled with the assembly but with assembly instructions from our Engineering team, they managed to get things going. The playgrounds parts which they sent were not meant to be for an elaborate playground. However, the villagers was a bit too ambitions & configured a bigger playground based on the parts supplied.

The inevitable happened when they found that they were shortage of parts. Through their ingenuity, they fabricated some parts locally & the playground was completed in January 2018. This will be Purpy & friends home for the next 10 to 15 years. Purpy & friends are finally out there to play with the children!!