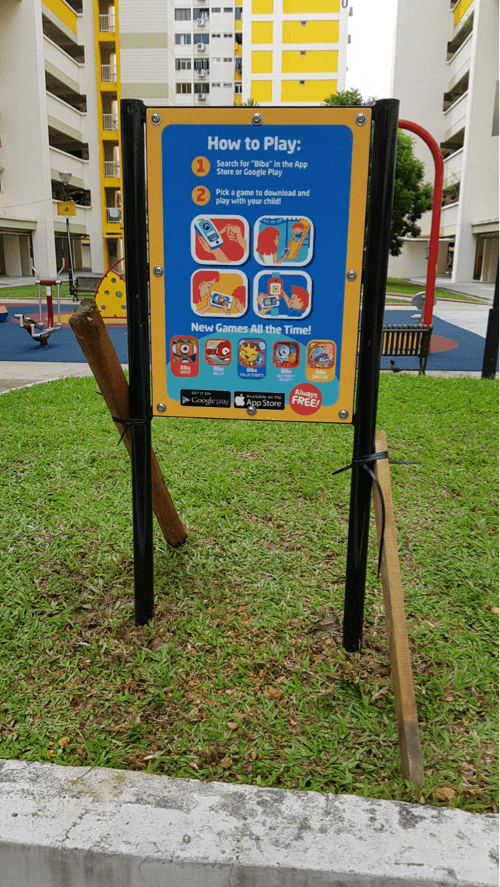 So what is Biba, the next generation of playground system?

Biba is an Integrated Playground System that encourages Parent and Kids Interaction by integrating downloaded mobile apps and working with reality markers installed at the playground. The apps can be downloaded on smartphones via Google Play and App Store, free-of-charge.

Through research, surveys have shown a decline in physical activity amongst children and a corresponding increase in screen time. Biba addresses the problem of excessive screen time amongst children by seeking to reorient them towards healthy, outdoor play. While helping to achieve these healthier outcomes, Biba provides another advantage. Playing Biba at the playground can collect a slew of data around playground usage hours/days, physical activity levels of children playing and corresponding attendance. These actionable data provide valuable information for playground owners to make critical decisions around expenditures, maintenance and program planning.

The dual advantages are accomplished through a suite of fun, imagination-driven and exciting mobile games intended for parents to play with their children at the playground, by interacting with the specially designed and installed markers on the play equipment.

How does Biba work?
Biba games are played with the parent as the referee. The parent downloads the game and holds the phone throughout the entire game experience. Currently, there are a dozen games to choose from. New games are continuously being developed and added. Playgrounds that are Biba installed will display a sign as shown. The games are designed to be familiar to both parents and children, containing elements of classic schoolyard games and common screen-based experiences. They’re easy to learn and eminently social. Biba adventures leverage the best part of being on a playground-imagination by tapping into make-believe.

For example, if a child is an archaeologist in Dino Dig, they’re squeezing through tubes and climbing up ladders to dusty dig sites where they can sweep, blow and chisel to unearth new bones on the phone. It’s all about fun, imaginative game scenarios that naturally call for physical activity.

“As we continue to roll out Biba across playgrounds in Singapore, we shall keep everyone updated. We are excited about this new technology to bring the playground to a new level. We hope to have your support in this game changer.” ~ EM Engineering